Here in California and in much of the country, we’re still in the throes of cold and stormy weather. If you ask me, the perfect way to combat the cold is to enjoy a warming bowl of stew or soup. Brimming with the bold flavors of harissa, preserved lemons, olives, and a wide assortment of spices, this Moroccan-Spiced Stew is the perfect winter meal! 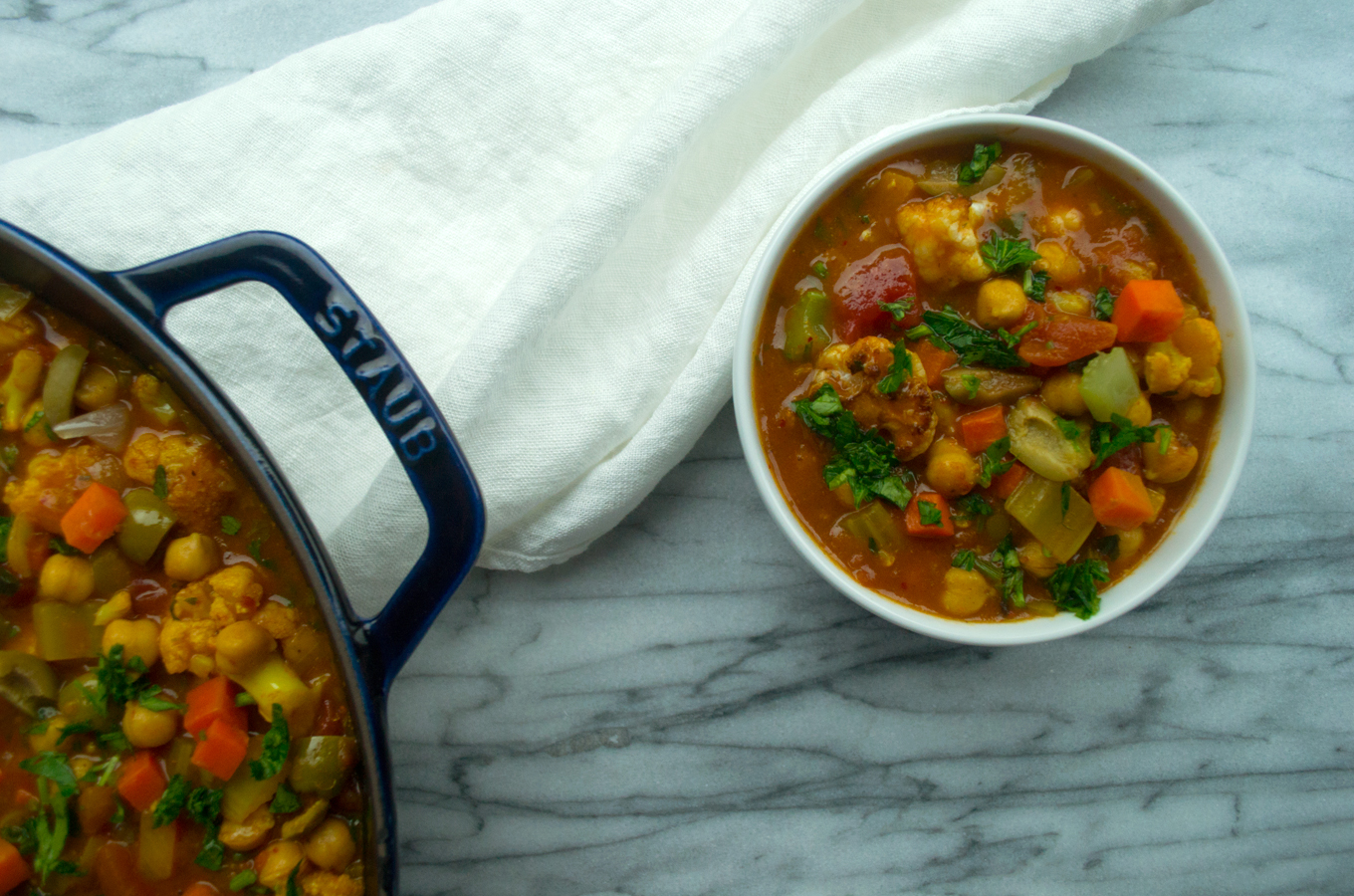 Last Spring, I was lucky enough to have an overabundance of Meyer lemons growing in my garden. I decided to try my hand at making preserved lemons, which is a traditional ingredient used in Moroccan and Middle Eastern cooking. Essentially, preserved lemons are lemons that have been pickled in salt and their own juices. The simple preserving process involves quartering the lemons, rubbing them with salt, then packing them into jars. I used this recipe from Nourished Kitchen as a general guideline. The most important ingredient is patience, since the lemons need to ferment at room temperature for about a month. 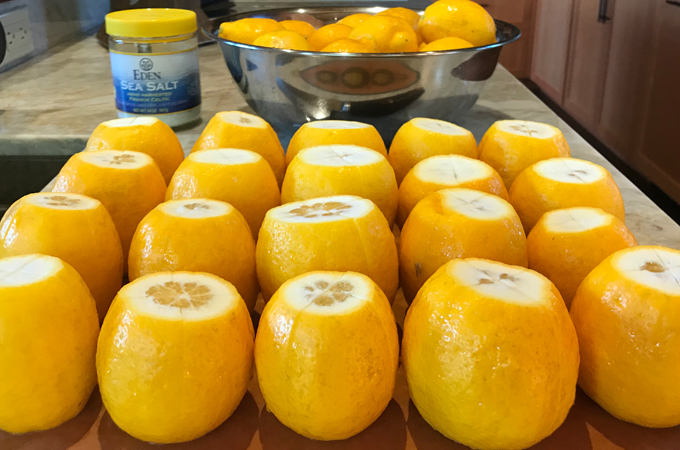 Lemons are always one of my favorite ingredients to use, but preserving them really amps up their flavor to another level. The sourness of the lemons becomes more mellow during the fermentation process. You can use the peels in their entirety because they soften during the preservation process. Thus, the citrus oils found in the lemon peels provide an explosion of complex flavors. While I have experimented with using preserved lemons in sweet applications, they really shine when used in more traditional applications such as this Moroccan-spiced stew.

An extensive use of spices is a hallmark of Moroccan cuisine. In fact, the famed Moroccan spice blend called ras el hanout is said to contain twenty-seven different spices. Spices such as cinnamon, cumin, ginger, and turmeric make an appearance here in this rich and warming Moroccan-spiced stew. Moroccan stews, also called tagines, typically contain meat, but here garbanzo beans and cauliflower take center stage and create a hearty base that lets the variety of spices truly shine. 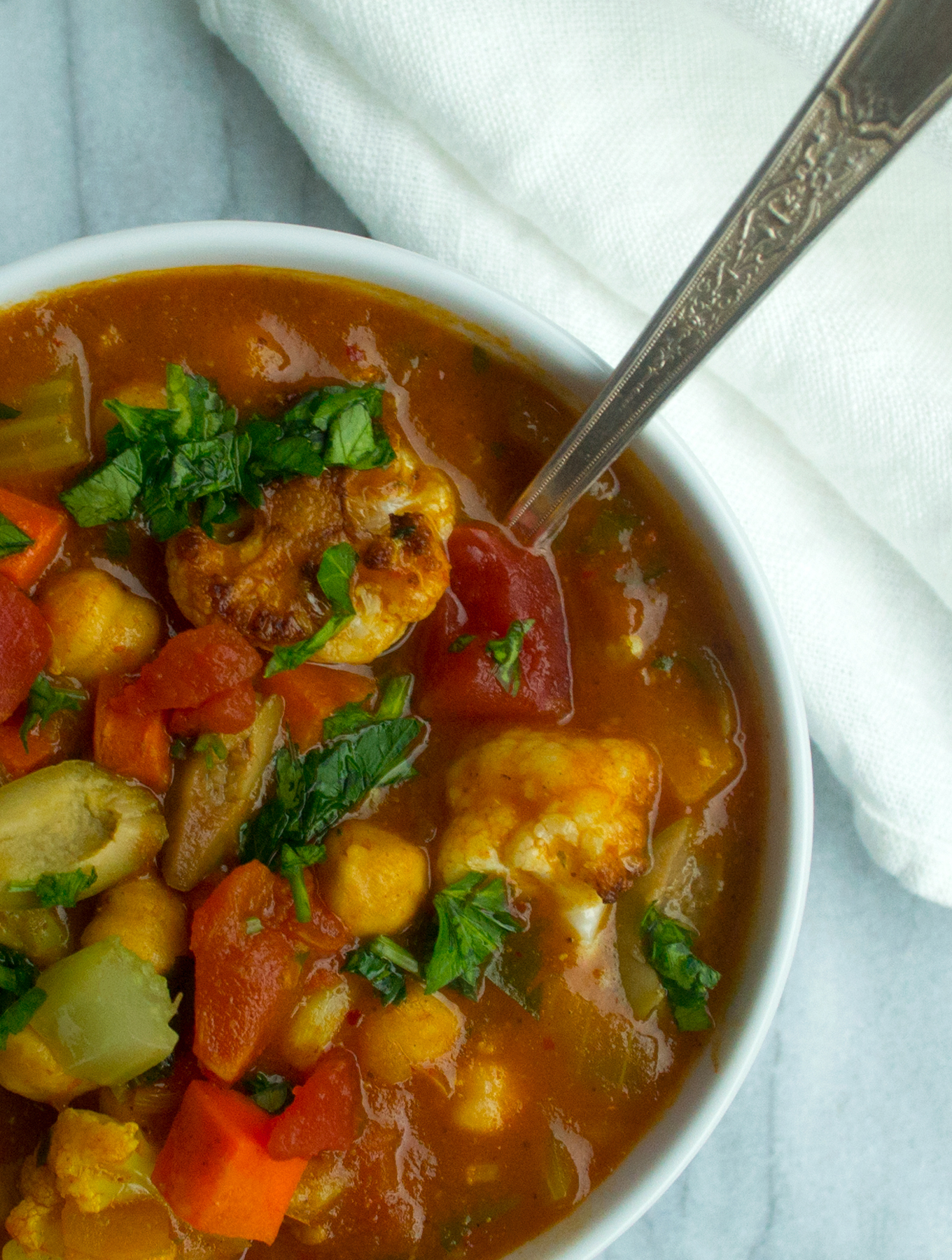 This recipe makes extensive use of the spices and condiments typical of Moroccan cuisine. Moroccan stews, also called tagines, usually contain meat, but here garbanzo beans and cauliflower take center stage. Searing the cauliflower at the beginning of cooking may seem like an unnecessary step, but it actually provides a lot of extra flavor and texture to the entire meal.

Preserved lemons can generally be found in specialty markets and some grocery stores. If you have trouble finding them, you can substitute the zest and juice of one additional lemon.